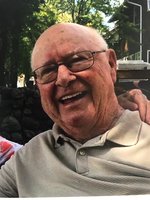 Donald R. Smith 03/10/1928 - 03/14/2021 Don is predeceased by his wife V. Mary Smith, his daughter Margaret Smith and his son Charles Smith. He is survived by his children, Terrence Smith, Mary Elizabeth (Beth) & Mark Power and Christine Smith (Matt Roberts), his grandchildren, Leslie Smith (Steve Ransom), Andrew Smith, Benjamin (Adrienne) Smith, Catherine & Josue Espada, Emily & Jacob Shearing, Mark Power Jr., and David Power and several great grandchildren. Don grew up in Canandaigua. He left school at the age of 16 and became a businessman and began running a billiard parlor and cocktail lounge. He served in the Korean War and rose to Sargeant First Class within his 22 months of service. He met Mary Pronest (at the bowling alley) and fell in love! Together, they raised five children in Penfield NY. Don was a family man, so he took a day job in the manufacturing arena in order to be home for them. He worked for Stromberg Carlson, General Dynamics and finally in management at Xerox. He retired in 1993 and he and Mary moved back to Canandaigua Lake. Don was an avid bowler. He took pride in his large vegetable garden in Penfield, and he was on the golf course whenever he could be. He enjoyed his life, had a positive outlook, good health, a strong mind and enjoyed engaging with others. He had a quick wit and an amusing personality. He left us with many words of wisdom, that will live on in our memories. He was dearly loved by family and friends and will truly be missed.