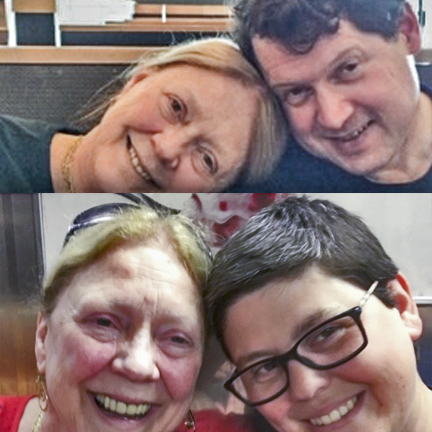 Constance D. Mahool, née Deline, passed away peacefully at her Farmington, NY, home August 15, 2020. "Connie," 68, is survived by her husband of 24 years Dana Malley, daughter Nicole Mahool, various extended family members, countless friends and acquaintances, and two grand-puppies. Born in Oswego, NY, November 9, 1951, Connie was the daughter of Elmer (d. 1979) and Lillian Wise Deline (d. 2012). Growing up in Oswego, she was known (along with a clique of devilish friends) for her snappy sense of humor and wicked wit. Stories abound. Just ask cousins Barb Wise Clark and Chris Pospesel Fitzgerald, along with friends Sue Henning and Kathy "Sepi" Eusepi. The lucky ones who've befriended Connie over the years can attest to an extraordinary woman imbued with a rare combination of compassion, intelligence, modesty, strength, unselfishness, a fine work ethic, and, of course, a treasure trove of wisecracks. ("What are you new here?") Her mother and father (sharp, hardworking, pillars of common sense) never had it easy. Nor did Connie. As a young girl, one of Connie's many chores was to restock the family grocery store, which no doubt contributed to her strong character and principles. However, for Connie, family always came first, as evidenced by her protective nature toward her younger sister Marcia (d. 2012), the adulation she exhibited with respect to Sharon (d. 2016), her older sister, and the love she had for her parents. Through sheer will and uncanny acumen, Connie earned a Bachelor's degree in accounting at Ithaca College, graduating sum cum laude, all the while juggling a jumble of jobs and tending to her colicky baby Nicole. She was a true multitasker. However, the profoundly love-filled relationship that developed between Connie and Nicole will always be regarded as something truly special, enduring, and beautiful. After many hardships, Connie found her niche in 1995 when she became the financial manager at Ithaca's widely known Northside Wine & Spirits. It was here that a magical union emerged with then general manager and principal wine buyer Dana Malley. The two married in January of 1996, and became each other's soul mate, best friend, and eternal partner. Who knew? Endowed with a superb natural wine-tasting palate, Connie traveled the world with Dana, and was instrumental in the eventual expansion of the store's overall selection. After Connie retired the two of them relocated to Farmington, NY. Upon her passing, Connie's deepest wish was for no sorrow, but instead laughter, love, and happiness. In lieu of flowers, Connie requested that a donation be made in her name to the American Cancer Society.

Share Your Memory of
Constance
Upload Your Memory View All Memories
Be the first to upload a memory!
Share A Memory
Plant a Tree