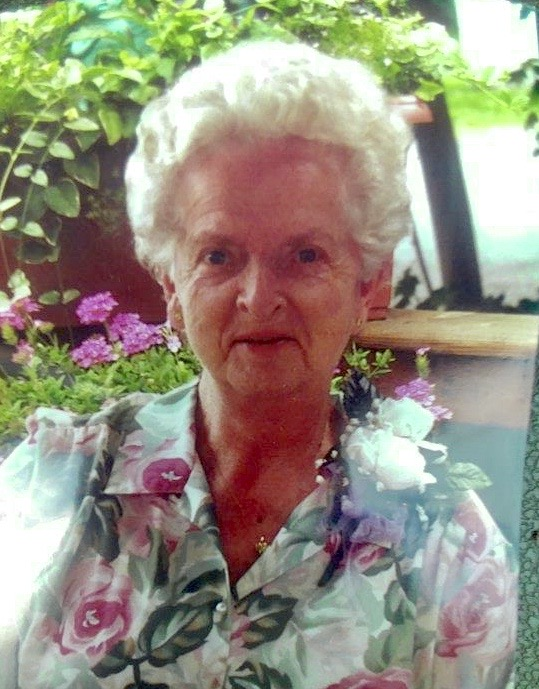 Obituary of Helen B. Chappell-Hayes

Helen B. (Honey) Chappell-Hayes Canandaigua- Helen Hayes, known to many as "Honey", passed away peacefully at the age of 97 on May 25, 2020. Helen was one of ten children, born on August 17, 1922 to the late Charles and Christine VanGelder of Chapin. She is survived by her six children, Patricia (Anthony) Villanucci, Jean Batte, William (Rosemary) Chappell, Joan D'Agostino (Charlie Cross), Joanne (Wilbur) Thornton, and Michael Chappell. Four Step-Children, James (Margaret) Hayes, Jerry Hayes (Michelle McCleoud), Sandy Hayes, and Jeff (Debra) Hayes; several grandchildren and great-grandchildren; sisters, Betty Burt and Shirley Burgess. She was pre-deceased by her husband's Clarence (Sam) Chappell and Stewart G. Hayes; sons-in-law, Joseph T. D'Agostino and Thomas Batte; son, Clarence (Sammy) Chappell; grandchildren, Edward Batte, Joseph T. D'Agostino III and Alessandra D'Agostino-Gifford; stepchildren, John "Jack" Hayes, Lynne McKendrick, and Laurie Burdick. In her early years Helen was employed at the Lisk Savory Company in Canandaigua. She then retired to her favorite job as a wife, mother, grandmother, sister, aunt, and friend. She also babysat for many children through the years. Helen enjoyed baking, sewing, a mean game of Scrabble and spending time with her family and friends. Helen instilled upon all that knew her the value of family, friendship and love. She led by example and was the sweetest soul one would ever meet. A private graveside service will take place in Woodlawn Cemetery. Arrangements are under the care of Fuller Funeral Home, Inc. Canandaigua. In lieu of flowers and donations it is the request of the family that you take a moment to reach out to your family and friends that you may not have seen or spoken to in a while, sit down to a family meal, appreciate your surroundings and all that you have been given in this life and not take it for granted fore no one knows what tomorrow may bring. To share a memory or express condolences online please visit www.fullerfh.com
Services for Helen Chappell-Hayes
There are no events scheduled. You can still show your support by planting a tree in memory of Helen Chappell-Hayes.
Visit the Tribute Store

Share Your Memory of
Helen
Upload Your Memory View All Memories
Be the first to upload a memory!
Share A Memory
Plant a Tree